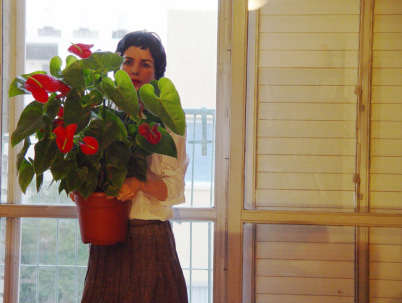 untitled, photography, 2008
Lilach Bar-Ami frequently engages in her works from recent years in "The Other": The Woman, The Stranger, The Immigrant.
​
According to Bar-ami, her Grandma Fibi had an important role in shaping her worldview and the places she is now interested in researching. Fibi immigrated to Israel from Morocco in her 40's. She lived in a kibbutz, where Bar-Ami grew up with her family and spent most of her life as a stranger in the new landscape, new language, new culture.

In her works Bar-Ami examines the places where friction between the old and the new is created, between "wild" and the "civilized", between beauty and pain, between full and void, delusional situations, an intoxication of senses that carries danger. fascinated by the "other", For example, the geisha or the belly dancer, along with the desire to own it and turn it into a production line, a souvenir object for the western tourist.

The "high" and the "low", the traditional and the contemporary merge in her work into one whole thing. The materials are collected from a variety of sources, such as family photo album, the Internet, Google, the private photo collection, encyclopedias, magazines and more.

For Bar-Ami, the "image" is the "hero" of the story in the process of creation. It can be a mountain or a rabbit, a butterfly, a tree, a sunset or a woman, through actions such as duplicating, copying, cutting, gluing, it examines the image again and again, deconstructs and builds, empties and fills, and so on.